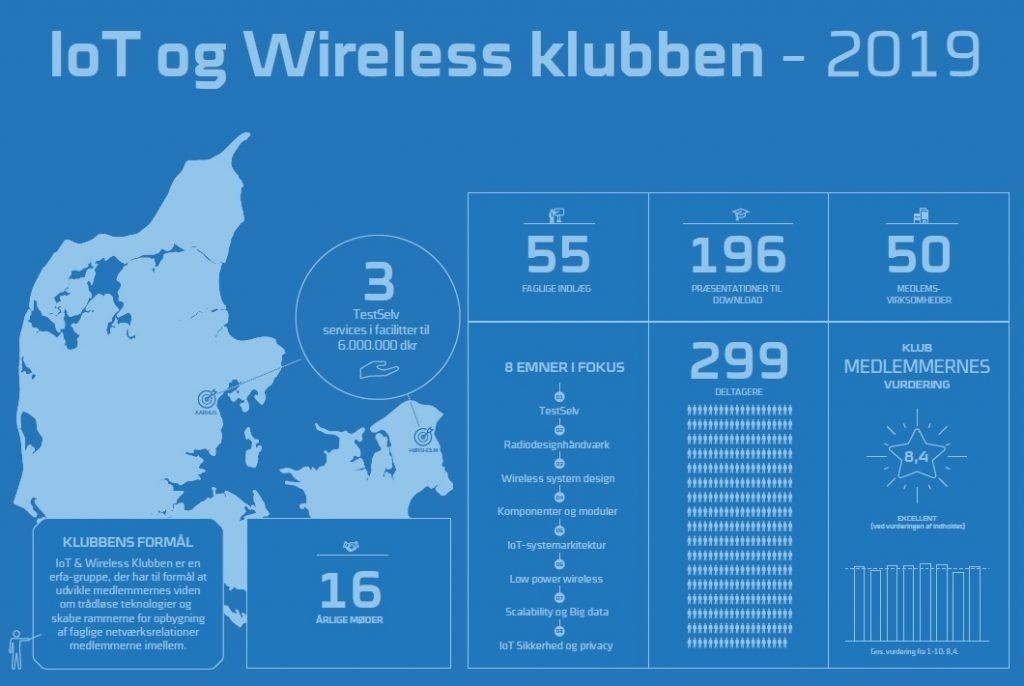 The IoT and wireless club had a great 2019. We had 299 attendees with an average rating of 8,4 out of 10 in satisfaction. Due to corona we have organized 3 virtual meetings with an even better rating. Something good has become better.

The corona virus is a challenge for all of us. The world is no longer as it was, in many ways worse, but in some way better. It forces us to innovate a come up with new solutions to existing challenges. The IoT and wireless club has been around for more than 10 years, where we have held physical meetings with great success. In the image you can see the key numbers for the club from last year.
- We had a whopping 299 attendees in the 8 physical meetings
- The participants gave us a 8,4 out of 10 rating in the satisfaction of the meetings
- There are almost 200 presentations from previous years available for download in the member site
- There are 50 member companies
- And test-it-yourself facilities for a combined value of 6 million kroner

So, like many others, it was easy to stay with business as usual as we had many attendees and a great satisfaction. But then corona cam and we could not meet in person. Therefore we changed from physical meetings to online meetings. Many pointed out that a full day online meeting was too much and that it would be hard to keep the attendees. So we were a bit nervous to launch such long meetings. But happily it was a success. The average rating of the three online meetings we have had this spring has been 8.7, 8.4, and 8.3, with and overall average of 8,5 out of 10. So we managed to achieve a better score than the physical meetings and even got 2 new member companies in the club.

When we asked the attendees what they thought, they would like for a mix in the future, such that every second or third meeting becomes online instead of physical. One primary challenge is to get the networking functioning. For this we tried a series of activities online:
- Change of program format: We needed shorter presentations and more small breaks – two talks of maximum 30 minutes followed by a 10 minutes break
- Introduction wall in the first break: We opened up a mentimeter open ended comment, such that attendees could introduce themselves
- Polls, polls and polls: It is a challenge as presenter to get familiar with who is listening, so we introduced a lot of online polls during the meetings
- Quiz: To summarize the meeting we did an online quiz challenge in kahoot
- Break video: with light entertainment on the meetings
We also experimented with creating breakout sessions, but sadly the technical challenges became too large. We also tried out alternative communication platforms, but as there are already technical challenges just using a standard software such as Microsoft teams, we decided to keep it simple. IT policies and audio technical challenges were too large for us to risk using other tools.