IoT device for monitoring of buoys 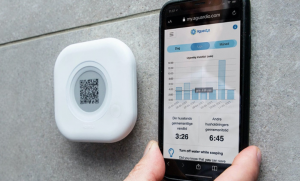 Experiences from several pilot projects in Denmark, Spain, USA and UK during a period of 18-months, shows that the visualization of shower time has been able to nudge us to reduce the time under the shower by up to 30%. Reducing a hot shower with 1 minute (approximately 10 liters of hot water) saves enough energy to run a 60 watt light bulb for 6 hours.

Aguardio G2 consists of a device to be placed on the wall in the shower cabinet which contains a number of sensors (movement, temperature and humidity) that automatically detect showers. The device counts the time of the shower, and the display informs the current time consumption during the entire shower. The sensors of the device send information about the shower to a database in the cloud, and via the mobile phone, you can directly access the consumption data by simply scanning the integrated QR code shown on the display.

Aguardio has been on the market for a few years before Xtellio helped developing Aguardio G2. Xtellio have developed an intelligent timer, a new display, connected the device to the NB-IoT/LTE-M network and simplified the product from two to one device. The device can now be installed in literally minutes and goes automatically online on a stable and future-proof mobile network which also improves the battery life significantly.