CLIMAID Mould assesses the risk of the mould in the building 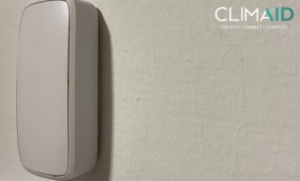 CLIMAID Mould is a system that continuously assesses the risk of mould at the cold bridge, in the attic or in the damp basement.

CLIMAID Mold is an affordable way to monitor many locations, rather than e.g. to measure the CO2 concentration. CLIMAID Mould is a system that continuously assesses the risk of mould in the building. CLIMAID Mold gives the building owner, tenant or the operations department an opportunity to react to the problem before the mold growth reaches a level where it has a harmful effect on the building or the people in it.

When we talk moisture accumulation and mold growth it's not a good location. Mould grows where there is damp, organic material and the right temperature. For example, it is by a cold bridge in the living room, in the roof room against the leaky roof or the damp basement wall without scope drains. With CLIMAID Mould Detector, everyone can follow moisture development, temperature and the risk of mould growth in the wall and behind the wallpaper without destroying it.

CLIMAID Mold also calculates the ventilation level on the basis of the moisture supplement in the room.

SSG documents the reasons of the mould

SSG has used CLIMAID Mold to examine the indoor climate in an apartment with evident mold growth. The raw measurements showed a high moisture level for the time of year, but still within the recommended range. However, the mold risk evaluation and the moisture supplement clearly showed that the moisture level was too high and that the tenats’ lack of ventilation was the cause of the mold growth.