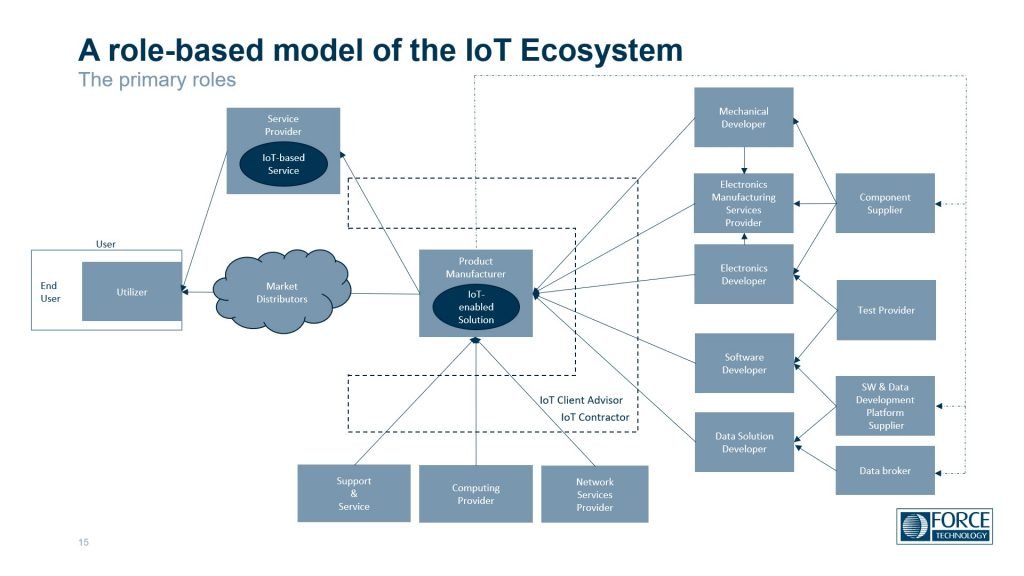 The role-based IoT ecosystem model maps what roles are essential for developing, operating and adopting IoT

As the Internet-of-things (IoT) is maturing the solutions becomes more and more widespread, operational, specialised and technical. As with any other industry, this results in a need for an ecosystem of organisations collaborating and competing to advance the focus of the ecosystem.

To illustrate the point, the maturing IoT Ecosystem can be compared to the ecosystem revolved around the automotive industry. First of all, there is an agreement and public consensus about what a car is, that it has a chassis, an engine, a steering wheel, a brake, and so on. This is partly based on cars being similar, i.e. standards, and on many years of public exposure to “the car”. Secondly it requires a vast network of sub-suppliers of automotive components that are specialised in each of their products, this can be tyres, metal for the chassis, paint for the car, electronic sub-assemblies, etc. Thirdly, it requires a societal infrastructure such as roads, petrol stations, electrical chargers, legislation, and so on. All of these are provided by actors taking specialised roles. The automotive industry is dependent on all the roles being filled and therefore each must be performed by multiple actors, such that if one actor fails, another can take its place and perform the role better.

In 1886 the first patent was issued for a car 14 years later series production began and in the 1950s there were approximately 40 million cars in the world – to today’s society which has been transformed by the car.

The term IoT was coined in 1999 and in 2015 there were more than 15 billion IoT devices in the world, and it is impossible to predict how large an impact IoT will have 50 years from now – but will have similar transformation to the world as the car.

The IoT ecosystem is already forming, but we need a terminology and model to understand the roles.

Mapping of all the actors did not provide the needed clarity in the model, as it was hard to compare one actor to another, as many had different roles, which were not a 1-to-1 match for categories of actors. Therefore, different segmentations were explored. Finally, the method for analysing and mapping the IoT ecosystem used a focus on roles as entities has were chosen as:
• Many types of actors in the IoT Ecosystem are covering many different roles
• Using roles instead of types of actors helps to keep the complexity down
• It is possible to define distinct roles for each part in the IoT Ecosystem
• The different processes of the IoT Ecosystem works well with the roles

Definition of the IoT ecosystem

The IoT Ecosystem is a network of organizations developing and adopting IoT products and services through both competition and cooperation. Each actor in the ecosystem affects and is affected by the others, creating a constantly evolving relationship in which each entity must be flexible and adaptable in order to succeed, as in a biological ecosystem.

To deliver maximum value when creating specific IoT products and services it is necessary for each actor to specialize in their field of expertise and to contribute with this specialized knowledge to the other actors in the ecosystem collaboration.

As more product manufacturers IoT enable their products, they become part of the ecosystem and potentially become suppliers of more components available to the ecosystem. Thus, enabling the ecosystem to evolve with new and more IoT products and services.